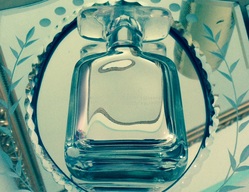 ESSENCE
I have been a long-time lover of Narcisco's For Her. It was my signature about a decade ago when it came in a potent oil that was in a black roller-ball. Here we are many years later, and I have finally spent some time getting to know Essence. I don't quite love it the way I love For Her, but I do love it all the same!

It starts out smelling like Nivea lotion--powdery, creamy, floral (mostly rose). As it develops on the skin, it becomes downright balsamic, and the iris starts to emerge. For the majority of time on my skin, it no longer smells like Nivea, but instead smells more like incense and musk. A real personal fragrance because it smells clean, but clean in a different way. Not like laundry or soap. More like when you step out of the shower and you can still smell the perfume that you put on hours earlier. It becomes part of you and sort of melds into you.

I also noticed time and again that I smelled the ink from a ball-point pen. That is what gives it a metalic edge. It is kind of strange, yet somehow it works with all the other notes.

A new (old) love from Narciso!
NARCISO
For Her was my signature for quite some time. When it first came out it was made in a roller-ball oil, and that was the most incredible perfume out there, devastatingly sexy! It was hard to believe I could ever love another Narciso so much. I tried this new one recently, and wow--it is gorgeous! Smells rather synthetic to be truthful, yet at the same time it's so incredibly creamy and cozy. The gardenia actually seems very ethereal. Sillage was so good! I could not stop sniffing myself, literally because sillage was so big I couldn't help but smell it. I was ready to move on from For Her a long time ago, and now I have Narciso in its place. A very worthy new alternative. Has NR's fingerprints all over it. ​