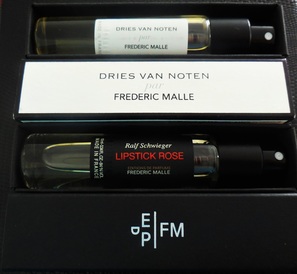 CARNAL FLOWER
Side note: I can't believe anyone could compare Carnal Flower to Mimosa by Christiane Celle. Mimosa was my signature throughout college. It's green and sweet and delicate. Mimosa is nothing like the loud, bold, exotic tuberose! Carnal Flower is not only tuberose, it's highlighted by the tropical note of coconut. Comparing those two is like saying lily of the valley and rose are similar. I am only pointing this out because I feel the comparison is awfully misleading.

As for the review, I am not super excited about this interpretation of tuberose. It's much more of a soliflore than I was expecting. I guess if you're a die-hard tuberose lover, this could be a real winner. But I for one was hoping for more depth, more coconut, more something. Smelling this takes me right back to tuberose perfume oils from Hawaii again, and I am bored with that.

For more sensory interest I prefer Daphne by CdG or Nuit de Tuberose by L'Artisan. (Sept 2012)
DRIES VAN NOTEN
This is a pleasant perfume, but IMHO it's not worthy of its price point. It's a synthetic milky woody vanilla with low sillage. It smells a lot like Wheaties, like when you open a new box and there is the scent of the wheat cereal plus cardboard.

I find Dame's Mexican Vanilla and Carner's Palo Santo to both be in the same vein as this, and I'd suggest trying them if you end up finding the sillage of this to be as poor as it is on me. Carner's perfume is more milky, boozy, gourmand, and quite a bit sweeter, so be prepared for that. Dame's vanilla is less woody and you actually can smell the nutmeg that is supposed to be in Dries. (May 2016)
EN PASSANT
En Passant is a modern lilac masterpiece. My own opinion takes me by surprise because at first it seemed like a light and boring soliflore. I regretted spritzing myself all over thinking "I could have worn a better fragrance, and now I'm stuck with this boring soliflore that will never match up to Crabtree and Evelyn's Lilas perfume" (discontinued around 1998).

At first I smelled a cold and crunchy cucumber with freshly cut lilac; along with a weird, synthetic, plastic-like scent that irritated me and ruined what "could have been perfection." The perfume started out watery and clear.

As the day wore on, a marvelous scent kept making its way up to my nose. By the third time I noticed it, I figured it must be coming from me. When I put my nose to my wrist, it still didn't smell that great. But when I put my nose a few inches from my wrist and wafted, that's when the magic happened. This perfume is truly worthy of its name, Passing Through. It's the scent of purple lilac bushes in full bloom; a scent that rides around on waves of air, sneaking up on you at unpredictable times--so close that you reach out to grab it; but it slips through your fingers.

I was taken by the depth of the perfume. At times it seemed there could be more florals in it than just lilac, but I think the magic is that En Passant takes lilac to a whole new level. It's no longer a soft, innocent flower, but a velvety, rich one. The best way I can describe the scent is lilac in 3D. Lilac perfected to the point of being almost unreal. I would still love to have an $18 bottle of Lilas like in the old days, but honestly, I'd want En Passant too. It's worth the price tag. (Sept 2012)
IRIS POUDRE
I really like this fragrance, and at first sniff I thought it smelled very familiar. It didn't take long to realize it smelled like Chanel No.5. I'm genuinely surprised no one has mentioned that yet. This seems like a simplified or streamlined version of that famous perfume -- minus the civet, jasmine, and citrus. It's delicate and powdery, that's for sure. If I didn't own 4 different formulas of Chanel No.5 I would buy this!
​(Mar 2011)
L'EAU D'HIVER
L'Eau D'Hiver is my first Frederick Malle purchase. It's an unusual purchase for me because it's really a skin scent, but it's so soft and beautiful that I couldn't help myself.

L'Eau D'Hiver might be similar to Prada's Iris Infusion Absolute, but instead of drying down to a resinous vanilla like that one does, it maintains it's powdery heliotrope profile throughout.

Imagine a new blanket of snow, no footprints yet. I like the fact that it's sweet, but not vanilla. I also like the bit of green I smell that gives it a crisp sensation, although this green note is really almost undetectable. This fragrance is the perfect eau for winter--

"Walking in a winter Wonderland...." (Sept 2012)
LIPSTICK ROSE
Lipstick Rose evolves so quickly on my skin. It begins as violet pastilles mixed with rosewater that almost immediately becomes a soapy, powdery rose reminiscent of Penhaligons Elisabethan Rose before settling down five minutes later into the scent of a Lancôme lipstick mixed with a touch of vanilla. On some days I smell the vanilla more than on others because it's barely perceptible to begin with. My skin tends to draw out vanilla notes, but vanilla is never a strong note when I wear Lipstick Rose.

It has been many years since I wore Lancôme, but in the 90's they had a rose imprinted into the lipstick, and they smelled like rose too, which I liked so much back then. Feminine, chic, and fun!

I went to Nordstrom and sniffed a Lancôme lipstick, and sure enough, it matched the scent of Lipstick Rose almost perfectly. It was rosy, just a little waxy due to the lipstick itself, and then it had a tangy note in it just like the perfume that keeps the scent from smelling too stuffy and old-fashioned. But I was amazed that I was right on the money.

The thing is: I love Lipstick Rose, but it only smells like Lancôme lipstick. It is not my "go-to" for the powdery cosmetics and lipstick scent that I love. My own personal favorites are the newest version of YSL's Rive Gauche, Chanel's new Misia, and Maria Candida Gentile's Burlesque, the latter of which is underrated and overshadowed by Sideris. (Apr 2016)
MUSC RAVAGEUR
When I first smelled the infamous Musc Ravageur, it was wonderful. But then it suddenly became so animalic it made my stomach turn a little. Oh but I know from sampling Tom Ford's Urban Musk that what starts out fecal can become awfully desirable once it melds into and works magic with one's chemistry, and Musc Ravageur is one of the best examples of this phenomenon that I know of.

On my skin it's a strong animalic musk with heavy doses of vanilla and amber. Then there's that delicate spice that I can't honestly say smells like cinnamon or clove in particular, but it definitely adds a mysterious oriental touch. For the first hour my mind is on overdrive with thoughts of "I like it. I don't like it...." By the second hour this perfume becomes a sweet, creamy, rich, mysterious, oriental heaven.

The sales associates compared this to Obsession, and as I continued to wear it, I could understand why. It's not really spicy like Obsession, but to me it does smell like a super high-quality, muskier version of it.

I think Musc Ravageur is one of the best musks on the market today. I used to love Jovan's White Musk in the 80's, and now I think to myself, You've come a long way, dear girl! (Sept 2012)
NOIR EPICES
Nicely spiced without being heavy, bitter, or too masculine. I am thankful that the orange is tame because I have trouble with perfumes that are very strongly orange--they start to smell like a heap of garbage to me, you know, when there's all that rotten fruit in it like bananas and orange peels. Not here though--this is a light, very un-noticeable orange. nobody would think "orange perfume" if you didn't mention it. The nutmeg is very strong and almost smoky at first. I was sad that this quality faded away somewhat, but it still lingers there in the background. The other spices are blended perfectly into the fragrance. This is not anything like Opium, which I find too harsh. It actually doesn't remind me of the holidays or of mulled cider in any way, which surprises me based on the notes. It's easily unisex; and not overbearing in any way. It's very smooth, warm, and lovable. (Sept 2012)
PORTRAIT OF A LADY
Now here is a perfume with sillage and longevity that I so greatly long for yet rarely find in modern perfumes. Most fragrances today should be called "scents" or something like that because they are so weak and quiet, even if they are high-quality niches. Portrait of a Lady is truly worthy of being called a "perfume." It takes a while for it to really meld and become one with my chemistry, but it's worth the wait. For the first 1-2 hours, it's so strongly patchouli and black currant. I have never liked patchouli, yet lately it seems to be growing on me. The patch here is nice and smooth, damp, earthy, and pairs very nicely with the sweet, fruity currant. After about 2 hours, the patch softens up considerably and blends a lot better with the other notes. I know the notes mention spices, but they are so subtle that I would never think of this as a spicy perfume.

Out of all the Malle perfumes I've tested, Portrait of a Lady is the most grown-up, the most like an old-fashioned, full-bodied perfume. I am on the fence as to whether I really think it's a modern masterpiece or not, whether I want to own it or not, whether it's really "me" or not, whether I can handle all the patchouli or not....but in any case it's very beautiful. (Sept 2012)