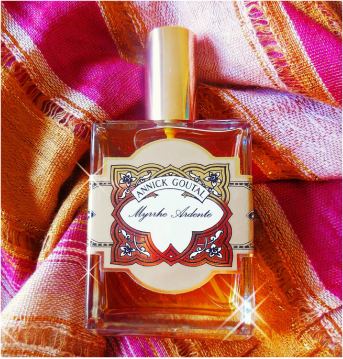 CE SOIR OU JAMAIS
This IMO is everything a true rose fragrance should be--no more, no less. It's the cream of the crop. This fragrance is the embodiment of a true, grand, passionate romance. If you are a lover of roses, you can't possibly go wrong with this choice. It's Scarlet O'Hara and Rhett Butler in Gone With the Wind! (Nov 2010)
EAU DE CAMILLE
This was all wrong with my chemistry. I am glad I bought only a decant, so please test before buying because this is not for everyone. It started out green and almost identical to grass and ivy, and then maybe gardenia, and then it suddenly took a nosedive from which it could not recover. I think it's the syringa note, and on me it smells like rotten celery with mayonnaise and mustard. I wish I were joking. This was a nightmare with my chemistry, which is unusual as I typically love green perfumes. No way, Jose. I can't wear this, it's a scrubber. (Mar 2015)
EAU D'HADRIEN
It seems like this is a single note lemon perfume--but I love it. I find it to be super refreshing and clean. It can definitely be worn by either a man or woman. I never thought I'd like such a linear lemony scent, but I do! I am very sensitive to "bathroom cleaner" lemon, and I don't detect any here. Just sun-ripened Amalfi lemons in this bottle. This seems like a great daily fragrance for right when you get out of the shower...works for any time of year, day or night, any time you want to just smell clean and even a bit uplifted. (Dec 2011)
EAU DU CIEL
Eau du Ciel is oh so belle!

What a magnificent and fragrant linden perfume! It's light, fresh, and clean, like honey water. I had been wanting to test this for many years, but I could never find a tester in any of the stores. Finally, a generous member gifted me with a decant. I am so lucky!

I was raised Catholic, and this perfume reminds me of some of the words to one of the songs we often sang in church:

I think those words capture Eau du Ciel better than anything I can come up with.

I've used to own and love French Lime Blossom by Jo Malone, but now I prefer Eau du Ciel. (Nov 2012)
EAU DU SUD
Eau du Sud opens with such thick lemon that it almost seems syrupy. As it dries down, I detect the sandalwood, basil, and mint; an exquisite combination, easily reminding me of open air markets in Provence. The herbacious drydown is so gorgeous. I've smelled many Annick Goutals, and Eau du Sud is one of my favorites. I find that projection and longevity are better than that of many of her other fragrances.
​(Dec 2010)
LE CHEVREFEUILLE
This is an extremely green, zesty interpretation of honeysuckle. For that reason I am disappointed, as I was hoping for a sweeter honeysuckle. Either way I think it's a beautiful perfume, perhaps the only sour perfume I would actually wear, as I am hyper-sensitive to sour scents. This mostly smells like crushed green leaves from a lemon tree combined with lip-puckering lemon juice and a bit of honeysuckle. It is lovely for spring or summer. I am wearing it on a very hot summer day, and I am enjoying it despite the fact that it is not what I hoped for. Like most Annick Goutal citrus perfumes, this one doesn't last long or project well, but it is so delightful that if you love the scent, I say buy a bottle! (Aug 2012)
MUSC NOMADE
Musc Nomade is a delicate, quiet, earthy musk. Kind of reminds me of being alone in the wilderness at twilight, when a bit of night fog is still swirling around in the air.

The big word with this perfume is SUBTLETY. There are many notes, but they are so subtle it took a long time and many tests to figure out exactly what I am smelling and when. It has odd top notes, an unlikely combo of something waxy vegetal blended with a hint of leather. I get the same impression every time I wear it. This combo soon wears away completely. A slightly powdered musk appears, but mostly I notice a lot of amber and woods, more so than musk. There is also a vanillic note, which adds a little something sweet. In the drydown I smell something a bit like dried herbs, which luckily aren't tangy.

Definitely an interesting musk, but this would not be a great choice if you are looking for a sillage bomb because, again, it's very subtle.
​(Apr 2016)
MYRRHE ARDENTE
Where is the myrrh, and why does this smell like root beer?! That was my first reaction. But I have to admit, I like this creamy root beer scent. It smells like somebody singed some dried herbs, made root beer with them, and then added some vanilla ice cream. I have always loved root beer floats. I used to always buy this particular brand that tasted especially dark and intense, and this reminds me of it.

Again, I ask: Where is the myrrh? Upon close inspection and numerous attempts to scrutinize, I do detect it. Myrrhe Ardente features the most common myrrh, the kind burned in a Catholic church, the sacred C. myrrha, not to be confused with sweet myrrh, a.k.a. opoponax (C. guidotti). The former has more of a dry, slightly bitter, woody scent whereas opoponax smells a lot sweeter and more balsamic. Myrrh is present, but it is not particularly obvious. It's as though the perfumer wanted to take the resin and play up some other things that compliment its scent, rather than building a myrrh soliflore. Myrrh is the keystone, not the bridge.

Why root beer? I still can't explain it. Root beer is a mix of many different herbs and spices.  I have scoured the internet, and I can't find one single note pyramid that includes herbs or spices...nor root beer, for that matter. But I smell nutmeg, licorice, star anise and fennel at the very least. I was also sure this was as much an immortelle perfume as it is a myrrh perfume because of its sweet, syrupy, herbal profile.

One component of root beer is honey, and it's easy to detect some creamy beeswax in the base.

I tested Myrrhe Ardente many times over the course of a couple months, and I have only just begun to wrap my mind around it. I may never understand it. I honestly may never come to truly appreciate it. There is something about it that I simply don't "get". Perhaps that is why it was discontinued--it doesn't connect with its audience? We expected myrrh, but we got root beer instead? I'm on the fence: either this is a myrrh masterpiece, or it's just an oddball that is rightfully discontinued.

In any case, I absolutely love Myrrhe Ardente. It's warm without being stuffy. It's creamy and comforting like a root beer float on summer evening. I have never smelled anything even remotely similar to it. And it actually works well in either warm or cold weather. It's an absolute keeper. (Jun 2016)
NINFEO MIO
Woody Aromatic is absolutely right. At first this scent is so down-to-earth, so outdoorsy, a beautifully refreshing herbal tonic. Something about it smells so familiar. For a moment it makes me think of the scent of fresh pine, like when there is a Christmas tree in your house. Or maybe lounging lakeside at a cabin in the mountains. I can easily smell the lemony-fresh citrus notes.

I thought I might buy this, but I did not like the drydown enough. Once the lemon and lavender fade away, you are left with pure pine, which is not something I want to smell on myself all day. (Feb 2011)
NUIT ETOILEE (Eau de Parfum)
I am so disappointed because the word that comes to mind throughout wearing this perfume is 'annoying'. Perfumes featuring wintry evergreens are among my favorites. I have sampled so many. Nuit Etoilee starts out with lovely prickly pine leaves. It smells like Christmas when the Christmas tree is in your house. But then there is this annoying citrus note--what's that doing there? And then a mint note that borders on toothpaste. Annoying! They smell awful together. Lemon and minty toothpaste at the same time? Yuck. And on top of pine? Double yuck.

It did not take long for the natural and promising pine note to become a dull evergreen scent mixed with an anemic immortelle note that smells vaguely like maple, all drying down to an annoying and common synthetic musky base. Sillage is terrible (EDP). That is annoying too. I scrubbed this off after a few hours, it was too annoying in too many ways.

For evergreens I prefer a whole host of other perfumes, Tiziana Ecstasy, Odin Tanoke, Parfumerie Generale L'Eau Guerriere, Enchanted Forest, Guerlain Winter Delice...so many. (Nov 2014)
SONGES
If you are dreaming of a vanilla-gardenia fragrance, I doubt you'll find a better marriage of the two scents than this. They play on each other beautifully in this fragrance. Songes begins with heavy, thick gardenia. The floral notes became much more demure as the fragrance evolved, while the vanilla became stronger, but not in a cloying way. At this point I found the scent to be quite pleasant. If I got my first whiff of it during this stage, I would not think it was "a gardenia perfume." (Dec 2010)