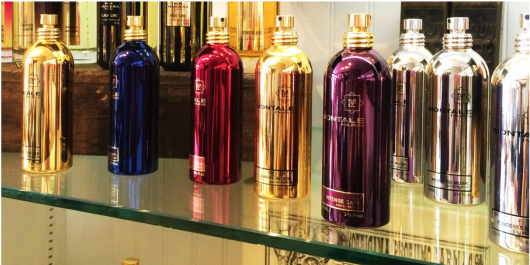 AMANDES ORIENTALES
This is exceptional! The bourbon vanilla is enormous, by far the booziest vanilla I have ever encountered. The top notes smell rubbery, perhaps there is some oud here, even if it is not listed. There are more notes than Montale reveals (I even went to their website hoping for the secret recipe, but there was nothing). I detect tobacco and some itty-bitty amount of some kind of citrus (kumquat? Tangerine?) as well as almonds. What's uncanny is that as the perfume wears, I go about my day and then occasionally catch these whiffs of toasted almonds; yet if I put my nose to my arm I do not smell them at all.

This is like a superfine version of L de Lolita. Instead of vanilla, cinnamon, and orange the notes are replaced with more exotic ones like bourbon vanilla, kumquat, tobacco, toasted slivered almonds, and oud. This is indeed an oriental almond! And I love it! (Mar 2015)
CHYPRE FRUITE
I don't see any resemblance between this and CK Shock whatsoever.

While Chypre-Fruite is definitely fruity, I would not consider it to be tropical, and definitely no berries. The non-specific "fruits" are the star of the perfume. If there is any moss to be found, well, I haven't found it. I was hoping for more of a classic chypre accord, something I thought Montale might do well, but if the word "chypre" wasn't in the name of the perfume, I would not consider this to be a chypre at all.

Even when a perfume doesn't live up to my expectations, I could still love it for what it is. Sadly, this perfume gets no love. It's too light, too bland, something on par with Britney Spears' or J-Lo. I believe this is my first Montale 'dislike'. (Jul 2012)
FULL INCENSE
Oh my Lord. This perfume should have been named Spiritus Sanctus. Holy Roman Catholic church in a bottle. It takes me back to my youth in such a literal way that I find it very exciting. If my childhood friends smelled this on me, I'm certain they'd think I was really weird for wanting to smell like this. Oh how I hated it when they would burn the incense and the sharp, bitter smoke would fill up the church and suffocate everyone nearly to death. And we'd all sit there with straight faces when we really wanted to wave our hands in front of our noses. You know how bad memories can be funny in retrospect? It's kind of like that. Full Incense makes me smile when I think back on the memory of that dreaded smell (oops, I guess I just gave away the fact that I never go to church anymore). It smells just like church incense but with a touch of sweetness, so really this is how I *wished* the church would've smelled. I like it, but I think it would take courage for me to wear it without feeling totally blasphemous. (Oct 2012)
INTENSE TIARE
I actually don't smell any tiare or any distinguishable florals. THIS is pure coconutty suntan lotion, literally with the plastic bottle too. That's right, it does smell like it contains a note of plastic, but it's kind of nice. It's a sillage monster, great for daytime or hot nights in Hawaii or Miami or any number of other hot, tropical vacation spots. What I like about the coconut is that it's milky, not like dry, shredded coconut. Nice perfume. (Jun 2014)
JASMINE FULL
It took time and multiple attempts to stop myself from scrubbing this within the first five minutes. The opening is Soap City. The worst part is that it smells like cheap soap, the kind you get for Christmas knowing that the gifter bought it at a discount store. Nothing says, "I don't give a shit about you," better than a gift of cheap, stale soap. I abhor the bitter, waxy scent, also reminiscent of motel "facial soap".

Then, as if someone took a magic wand to my nose, the stale bitterness suddenly disappears, and I am left with sweet, rolling clouds of fresh jasmine in bloom. I do smell a hint of honeysuckle, which helps the jasmine to seem white and crisp rather than brown and wilted. Mmmm...sweet, wonderful, milky jasmine! A divine vine. (Mar 2015)
PATCHOULI LEAVES
It's drop-dead gorgeous. The amber is not synthetic like most ambers. This is a warm, mellow, slightly sweet amber perfume. Patchouli is intense--rich and nutritious like a peat bog. I smell plenty of dark, damp soil, full of partially decayed mosses and leaves.
It reminds me of Prada's Amber, but Prada is spicy, and I don't get that spicy quality in Patchouli Leaves.

So earthy, yet so heavenly. (Dec 2012)
RED AOUD
None of the reviews here could prepare me for how Red Oud would turn out on my own skin. It's gourmand, very edible and yummy, yet it's not sickly sweet. Must be the oud, I mean, who would want to eat something that smells like rubber, right? This smells exactly like some kind of silky, creamy, white chocolate truffle with a rose confiture center. I don't get any pepper at all, which I am kind of happy about. The most interesting facet of this perfume is a mystery note that resembles citrus--it's an inexplicable acridity. While anything sour or acrid usually turns me off, in this case it serves to balance out all of the sweetness.

The sad part is that as it dries down Red Oud becomes too been-there-done-that-soft-and-powdery, a la Loukhoum by Keiko Mecheri. And I like Loukhoum Parfum du Soir better than the other two as it has more depth and richness.

(I can't seem to forget this one...so while it's not my favorite Montale, I plan to buy a bottle.) (Jun 2012)
ROSES ELIXIR
This is dee-liiiiiicious!

Strawberries, beautiful florals, and just traces of vanilla and musk. Strawberry for grown ups, for women who were once little girls who loved Strawberry Shortcake (the character, not the dessert) like I did!

I still have my bottle of Miss Dior Cherie from when it was first launched, and I must say that I am very happy at the resemblance. I am always afraid my bottle will turn rancid, and then what would I do? I am going to hurry and buy a bottle of Roses Elixir while I can! They are not identical, but they share enough of the same notes and characteristics. I think Roses Elixir smells less complex yet also smells a bit darker, more syrupy, like a strawberry cordial. I do get that bit of green too, which prevents the perfume from being too candy-like. I would prefer to try Roses Elixir in the wintertime. It seems more heavy than fresh.

Delicious, just DELICIOUS! (Jun 2014)
VELVET FLOWERS
Velvet Flowers is a unique blend of saffron and peach blossom, the two notes that dominate the fragrance. The overall effect is rich, sweet, and syrupy. Golden ambrosia. The drydown borders on gourmand, like peach cobbler with a dollop of saffron-infused whipped cream. I would not call this spicy. Saffron is technically a spice, but it is sweet with honey-like nuances, so there is nothing "spicy hot" to be found here. Saffron makes the perfume very creamy.

This perfume could be perfect for warm summer nights. Longevity is great considering it's a floral-fruity. The richness of the fragrance prevents it from being overly youthful. In other words, most perfumes of this genre seem too playful or flirty to be taken seriously, but Velvet Flowers is a "perfume" in the classic sense of the word.

I have to add that I see no resemblance to Aoud Velvet, which has no spice and no peach whatsoever. There is certainly oud in Aoud Velvet, but there is no oud in Velvet Flowers at all. They are totally different perfumes. (Jun 2012)

Edit - March 2015: I finally own this beauty! After years of wanting it, I finally caved as it is getting harder to find.
WHITE AOUD
I'm enamored with White Aoud. It starts out with such strong oud that I always think it will be inappropriate at work (who wants to smell like burnt rubber in the office, right?). But after about 20 mins, a soft vanilla sets in with some bright pink roses, then I start to swoon. The vanilla seems a tad powdery. The perfume reminds me of dark winter woods covered in pure, white snow. The oud gives the perfume an edge of sophistication that makes it very inedible. In contrast, Red Aoud smells more like candy to me.

The strange thing is that when I smell my skin up-close, it doesn't smell much like vanilla, yet the scent of vanilla is very clear when it drifts past my nose. So I find this to be an ethereal vanilla.

While it lasts and lasts like most of the other Montales, it's not as potent as some of the others I've sampled, so I am comfortable wearing it at work, as long as I don't over-spray.

P.S. This reminds me of Noir de Noir, but less spicy and a tad powdery, unlike NdN which is not powdery at all. (May 2013)
WOOD AND SPICES
There is no wood nor spice in this perfume. And it smells dreadful to boot. Can there be a single note called "cheap, nasty men's cologne"? Because that is what this smells like. This is Chris Kattan in A Night at the Roxbury. (Apr 2014)