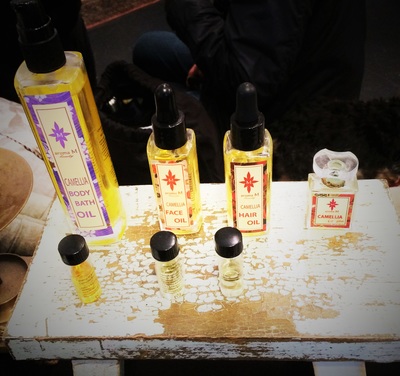 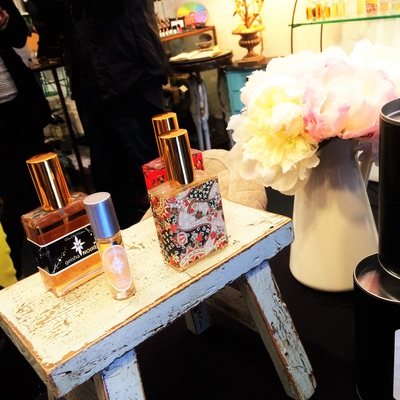 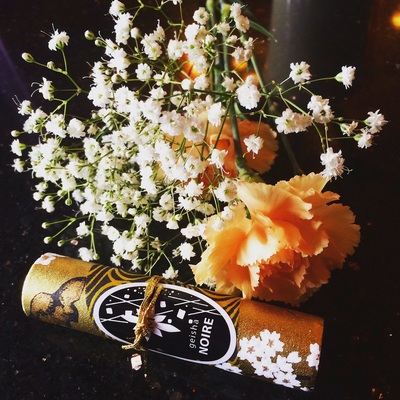 CAMELLIA (oil)
This particular perfume is 100% natural and contains camellia essential oil. It started out with the heady scent of lush, blood-red roses and a room filled with burning candles. The scent of melted wax is one of my favorite scents in perfumery, and Camellia must be the strongest I have ever smelled. Camellia has a vampy, vintage, full-bodied "boudoir" feel. The drydown revealed a sweeter, more tenderhearted floral (camellia), and just a touch of exotic jasmine. Absolutely stunning. (May 2016)
GEISHA HANA-CHA (oil)
WHAT is in this that smells so incredibly amazing? Top notes seemed like a harmless blend of simple and clean citrus. What developed blew my mind because it smelled super weird--an interesting indolic white floral (ylang ylang). And I mean indolic. I wondered if there was ambergris or something like that in the formula, because I will be honest it smelled downright funky. But if you know me, you know I gotta have some strong funk in my perfume armoire! I love my perfumes that smell like mildew, dusty books, and musty human skin. So I waited to see what developed.

Hours later, what I smelled on my wrist absolutely shocked me. It was the scent that I go nuts for and that I rarely find in perfume--the scent of water buffalo milk candy. That's right: WATER BUFFALO MILK CANDY. This does exist in Asia, and it tastes terrific. So suddenly I had this scent on my arm that was lusciously creamy, slightly floral, and very animalic. My eyes rolled back into my head. I nearly fell to my knees in absolute worship of this perfume. Disclaimer: I have no idea if it's my chemistry or if it's supposed to smell like that. I make no guarantee that you will also get water buffalo milk candy on your skin. I do know that I have to get my hands on my very own roller ball, pronto! (May 2016)
GEISHA NOIR (oil)
My initial impression was that of a light amber with not a lot of depth. But hours after hour, I kept smelling something gorgeous and addictive drifting up to my nose. I had written off Noire as a light fragrance, so I assumed that the marvelous scent was some other perfume on my jacket from the last time I wore it. But after a few hours, I smelled the spot on my skin with Noire on it, and I had to eat my words big time [sheepish look on my face]! It was a breathtakingly dense, balsamic incense; an intensely deep, precious amber; just barely sweet. I wasn't certain, but I thought there could be a little frankincense in it. Noire is NOT an Avignon-style Catholic church perfume. It is, however, one word: Crack. It will cause those embarrassing situations where you get caught sniffing yourself in public, at a red light, in a meeting with an important client, and so on.

While it contains vanilla, make no mistake about it, this is a balsamic perfume, and resins are the most intense notes. Noire is a dark amber and walks a tight line between feeling cold and medieval and warm and soothing. So it's a little of both at the same time. It is not churchy whatsoever, yet still feels very sacred. Out of the several perfumes I have sampled from Aroma M, I would say that this is Ms. McElroy's masterpiece. A sublime, distinctive amber, the likes of which I have never encountered. (May 2016)
GEISHA ROUGE (oil)
What a surprise, in a good way! My nose caught the delectable scent of tobacco straight away, but it was oddly juicy and tangy. I can not explain why, except that it made me think of fresh ginger notes that I sometimes smell in perfumery, a scent that reminds me of flat ginger ale. It's odd but also enjoyable. I like to imagine that this could be the scent of fresh, damp tobacco leaves.

Rouge developed into a smooth, mellow blend of spices. While notes include cinnamon and cloves, Rouge is nothing like Opium or Cinnabar, which, in contrast, smell jarring, peppery, and ostentatious. It's more along the lines of cinnamon chewing gum, yet that seems like an insult because the scent of Rouge is so much nicer. The drydown brings nuances of woods and vanilla, so subtle that sometimes I am not sure if I actually smell them. I also begin to smell just a bit of realistic smoke, like the thin line of smoke rising from a Japanese incense stick.

While Rouge isn't a loud perfume by any means, I still find it to be dark and bold and somehow very artsy. I would wear it at night, maybe when going out to a nice dinner with close friends at an exotic restaurant. (May 2016)
GEISHA VANILLA HINOKE (oil)
Right from the start, I realized it was not the usual foody vanilla. There are some vanillas out there that *attempt* to veer away from gourmand territory and actually succeed. I happen to adore non-gourmand vanillas. Vanilla Hinoke hits the skin with bright citrus, the distinct scent of cypress, and the lightest touch of worn leather. With time, the citrus backs down to reveal more of the fragrant Japanese hinoki, which is a fascinating wood as it smells rich and intense, yet there is an aromatic green quality to it. Certainly the kind of wood I would imagine finding in a Japanese spa.

I can't help but compare Vanilla Hinoke to other non-foodie vanillas. This type of vanilla has been attempted by Mona di Orio, but hers was all wood, so while it's beautiful, there is no vanilla to be found, so I still have a hard time with the fact that it's called "Vanille". It's easy to make a non-foody vanilla by removing the vanilla! Then there is Atelier's Vanilla Insensee, a sweet vanilla mixed with beautiful woods and sharp, tangy citrus. While it is not my favorite non-foody vanilla due to its citric tang, it is successful, as the end result is a vanilla you would not want to eat. My two favorite non-foodie vanillas are the woody, smoky, incensy Vetyver 46 by Le Labo and the green and musty Vanille Absolument by L'Artisan, albeit the latter perfume smells like vanilla ice cream on some people; not on me.

I can now addVanilla Hinoke to the exclusive non-foody vanilla list. It is not easy to turn vanilla into a scent that you wold not want to eat, but Maria McElroy has demonstrated exceptional skill in this task.​ There is a delicate complexity to this vanilla without going overboard with notes. Very admirable. (May 2016)