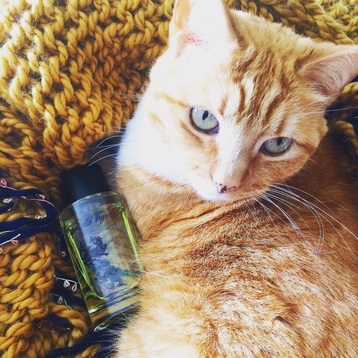 My cat with my bottle of Esprit du Tigre

BUBBLEGUM CHIC
Bubblegum Chic is my favorite from Heeley. Creamy tuberose is blended with the subtle scent of fruity pink bubblegum. I am not a big fan of tuberose, but luckily for me it dries down into a sweet and intoxicating white jasmine. In my mind, this perfume completely represents LA and Orange County. It's glitzy, girly, fun, gilded, expensive, and somehow has a superficial aura about it. The pink bubblegum and loud white florals seem obnoxious, yet they are addictive at the exact same time. This could have been Malibu Barbie's perfume or could be the signature of any one of the Real Housewives of Beverly Hills. Bubblegum Chic is not a wallflower. It begs to be noticed.

Edit 5/27/15: Now that I have the full bottle and can spray, the bubblegum is even more prominent. I am obsessed with this girly gem! Dabbed from the vial, I did not get the atomic sillage and longevity, so I am very pleased to own it.
CARDINAL
Another "frankincentric" (my word for revolving around frankincense) perfume that will appeal to those who seek a nearly literal version of Catholic incense that is burned in church. I have smelled a lot of other incense perfumes of this type but with massive projection, to the point of suffocation, as they are so intensely bitter and true to the resins. What I like about Cardinal is that it smells literal too, but it has an ethereal quality that makes it much more approachable/tolerable/acceptable to wear on ones body.  And by ethereal I do not mean that I detect gobbs of Iso-E-Super, which I am grateful for, even though it is entirely possible that this is loaded with Iso-E-Super.

This literal frankincense-and-myrrh style of perfume is not one that I would want to radiate from my body for all to notice, everywhere I go, all day long. This type is for my nostrils only. Thankfully, Cardinal stays close to the skin, yet it lasts a long time. I counted a solid 12 hours. Impressively it did not seem to fade and instead maintained its integrity all day long. Well done.
COCOBELLO
Very interesting, to say the least...because I am not a fan of coconut perfumes.  Coconut is one of those notes that just bugs me.  The only coconut I like to eat is the fresh meat, milk, or water. So I actually enjoyed Heeley's green, woody interpretation of coconut. Cocobello reminds me more of young coconut and coconut milk than it does the shredded and dried type that I (personally) can not tolerate.  I could detect a very subtle white floral, but it did not take over the coconut and only added to the tropical feeling of the perfume.  One thing that struck me as odd was a pepper-like scent that came out on my skin.  I can't tell if it's just my skin chemistry or not, or whether others also smell it?  It smells synthetic--perhaps one of the synthetic base notes has a subtle pepperiness to it?  I don't know, but that was the only thing about Coccobello that I did not care for.  I also like the woody, cedar-like base, which seemed to combine nicely with the green coconut.

So the verdict is that if there were any coconut perfume I would choose to wear, Coccobello would surely be one of my best options out there.
ESPRIT DU TIGRE
Esprit du Tigre doesn't actually smell like Tiger Balm, I have the stuff in my cabinet, but it has the same sinus-clearing effect.  Mint is the dominant note followed by some soft and very natural clove, a twist of lemon, and something smoky.  There is an Iso-E-Super type of synthetic cedar-wood base that I don't typically enjoy, but in this perfume it creates a watery effect that I like. Translucent as this fragrance is, it lasts many hours and projects in periodic wafts.  It's is a good spicy cologne for the warmer months as it never becomes cloying, but I also enjoy the watery smokiness in winter. To me it has an interesting balance of warm and cool...like Tiger Balm.
(Updated 1/2/17)
PHOENICIA
Phoenicia starts out with smoked vetiver, a dash of incense, and dried dates. I was very much reminded of L'Artisan's Timbuktu. While Timbuktu remains green and fairly fresh and bright, Phoenicia turns to the dark side with a note of rubbery, medicinal oud that soon takes over everything except the dried dates.  Initially I thought it smelled totally masculine, but the subtle sweetness of dried fruit makes it wearable on the right woman's chemistry.  The oud tames down with time, its rubberiness blending seamlessly into a creation that does somehow evoke ancient faraway places.